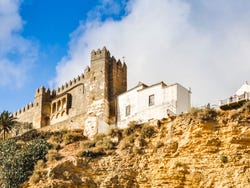 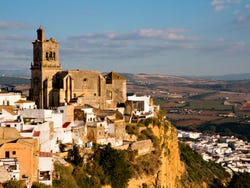 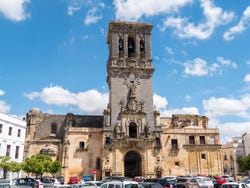 Once a small kingdom in Islamic Spain, Arcos de la Frontera today is a sleepy hilltop village characterised by its white houses and Moorish architecture, like many of the Pueblos Blancos, or White Towns of Andalusia. After meeting your guide on one of the typically steep cobbled streets, you'll begin your guided walking tour of the enchanting historic centre.

Not far from your meeting point, you'll see the Puerta de Jerez, or the Old Jerez Gate, part of the remains of the ancient Roman and Moorish city walls. From here, you'll take in the sight of the Palacio del Conde del Águila, a 15th century palace that is a true architectural gem, a fusion of late Gothic and Mudejar traditions.

You'll then reach Plaza del Cabildo, a square in the heart of historic Arcos de la Frontera and home to some of the town's most emblematic monuments. Admire the 17th century stone entrance to the Old City Hall and the imposing Medieval Castillo de Arcos, a castle built over the 11th to 15th centuries and used as a military fortress during the Muslim period. The Plaza is also home to Arcos' Parador, a traditional luxury hotel housed in a converted historic building, and the Balcón de la Peña Nueva, a viewpoint at the edge of a sheer-faced sandstone cliff which offers spectacular panoramic views over the surrounding Andalusian countryside.

Discover the town's history through the diverse architectural styles that make up the next buildings on your guided tour. You'll see the Iglesia de San Pedro, a 15th - 17th century church built on top of a 14th century Moorish watchtower and the Basílica de Santa María de la Asunción. This Mudejar church has Gothic, Plateresque, Renaissance and Baroque influences from the additions and renovations that were made over the 15th to 17th centuries. You'll also visit the Mirador de Abades, another viewpoint which looks over the terracotta-roofed whitewashed houses of the town and the beautiful natural scenery of the Sierra de Grazalema and Los Alcornocales national parks.

Pilar our guide has explained everything to us great A very pleasant visit Opinion translated. Show original.

I travelled with my partner
Show all the reviews