Lose yourself in the rhythms of flamenco and Spanish guitar of the Maestros de la Guitarra. Discover the roots of this Spanish folk music and why it is enjoyed by millions with this unmissable show. 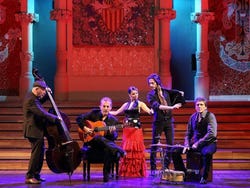 Maestros de la Guitarra offers an annual calendar of more than 300 Spanish and Flamenco guitar events in emblematic venues around Barcelona, such as the Basilica of Santa María del Pi, the Palau de la Música Catalana, the Club Capitol and the Church of Sant Jaume. Most of the concerts take place in the Santa María del Pi.

Each concert is an authentic performance by guitar virtuosos such as the Scot David Russell (considered the best classical guitarist in the world), the Italian Aniello Desiderio (know as “The Phenomenon”) and Manuel González (one of the best specialists of Spanish guitar in the world according to The New York Times). The series of concerts is completed with some of the most acclaimed local musicians, such as Pedro González, Jesús Guerrero, Luis Robisco and groups such as the Barcelona Guitar Trio and Barcelona 4 Guitars.

The concert will take place in the Santa Maria del Pi Basilica, a gem of modernist Catalan architecture located in the gothic neighbourhood.

Up to two children under 10 can attend for free.

US$ 27.30
Free cancellation up to 24 hours before the service starts
Book

The activity was very different from what we expected but we were not disappointed because the musician was amazing Opinion translated. Show original.

It is expensive for what lasts (45min) Opinion translated. Show original.

9.60 / 10 357 reviews
Our free tour of Barcelona is ideal to start exploring the city. We'll tour the historic centre of Barcelona to discover all its mysteries. Plus, it's FREE!
Free!
Book
like

9.40 / 10 108 reviews
Reserving our private guided tour you'll have a guide at your disposition to discover Barcelona with yout partner, family or group of friends.
US$ 106.80 per group
Book