The Normanno Svevo Castle in Bari is one of the main treasures in the capital of Puglia, dating back to 1132. Discover its extensive history with this guided tour. 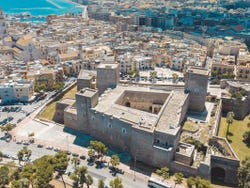 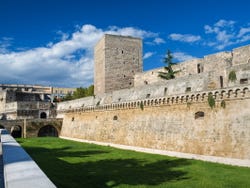 At the time indicated we'll meet at Piazza Federico II di Svevia, and from here we'll head to the Normanno Svevo Castle main entrance. One of the most impenetrable fortresses in Puglia awaits us!

The castle now serves as the headquarters of Puglia's Directorate for Cultural and Landscape Heritage, but it was previously a stronghold. After being built by the Normans in the 12th Century, it was destroyed and rebuilt by Frederick II in 1240 into one of Puglia's most renowned fortresses due to its strategic position. Its important features include the moat and the main gate.

Once inside we'll learn more about the castle's history and how it came to form part of the Aragon Crown. During this time the fortress became a Renaissance residence, while it belonged to King Ferdinand of Aragon. Later, Isabel of Aragon made it her residence and added other features including the sloping walls, the Swabian Hall and fortified walls.

We'll also visit one of the most interesting parts of the castle, the Gipsoteca (Plaster Cast Gallery), which contains a collection of pieces which display Puglia's architectural development from the Middle Ages to the 20th Century.

After an hour inside the castle, we'll finish the tour at the main gates.

Entry to Normanno Svevo Castle and its Gipsoteca.

US$ 26.60
Free cancellation up to 24 hours before the service starts
Book

10 / 10 4 reviews
Settle into a tuk-tuk and explore Bari in this unique mode of transport. Discover the castle, the basilica, the cathedral and Apulia's cultural traditions!
US$ 54.50
Book
like Free

7.60 / 10 14 reviews
Lose yourself in Bari's picturesque Medieval streets and immerse yourself in its legendary history on this free walking tour of Bari.
Free!
Book
like

8 / 10 1 review
Indulge your tastebuds on this unmissable food tour of Bari. Discover the Apulian city through its most typical delicacies!
US$ 42.40
Book