Located in the historic heart of Cordoba, the Alcazar is a spectacular Medieval fortress and one of the must-see monuments in the Andalusian city. Discover its historic legacy on this guided tour! 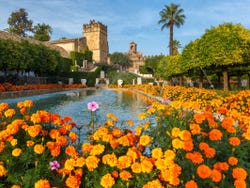 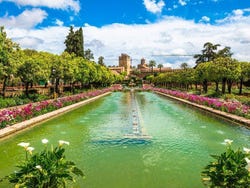 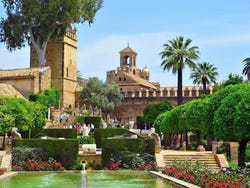 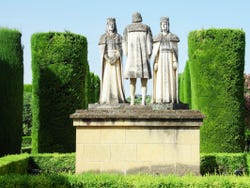 Your guided tour of the Alcázar de los Reyes Cristianos, or the Castle of the Christian Monarchs in English, will begin at the main entrance of the historic fortress. During the tour, which will last approximately one hour, you'll visit the interior of the extraordinary monumental complex, which dates back to the Middle Ages.

Firstly, your expert English-speaking guide will reveal why the Alcazar was first constructed. You'll also learn about the different events that marked the history of the site, which was occupied by Visigoths and then Muslims before Christian forces claimed Cordoba for themselves in the 13th century.

Visit the impressive towers and most elegant rooms of this magnificent Moorish style monument. You're bound to be enchanted by the Hall of Mosaics, the Reception Hall, the Royal Baths of Doña Leonor and the courtyards, characterised by their water features and verdant trees which contrast with the golden stone and whitewashed walls. Every corner of the castle hides countless myths and legends, through which you'll discover the indisputable connection between art, architecture and the intriguing politics of Medieval Cordoba.

The final part of your guided tour will take in the famous gardens of the Cordoba Alcazar. Amongst its water channels, canals and ponds, your attention will be drawn to the vivid colours and sweet aromas of the flower-filled parterres. As you stroll through this bucolic area of the fortress, you'll spot a number of figures reminiscent of the 15th century: the statues of Christopher Columbus with the Christian Monarchs of Spain, after whom the Alcazar is officially named.

Visit the Jewish Quarter too

If you'd like to make the most of your time in Cordoba, why not reserve our combo activity to enjoy a guided tour of the Alcazar and the Jewish Quarter?

US$ 20.20
Free cancellation up to 48 hours before the service starts
Book

Main entrance to the Cordoba Alcazar.

My guide Angela was brilliant, a wealth of knowledge, very easy to understand and also very funny... a great tour!

9.70 / 10 2,129 reviews
This tour of Cordoba's historic centre covers the ancient city's most iconic sights. Visit the Jewish Quarter, the Alcazar and the Mezquita with an expert guide
US$ 47.90
Book
like

9.60 / 10 1,755 reviews
Discover the "Shining City", the archaeological ruins of a Medieval citadel built in the first half of the 10th century by the first Caliph of Cordoba.
US$ 20.30
Book
like Free

9.60 / 10 8,143 reviews
Discover the legendary history and culture of the Caliphate City on this free walking tour of Cordoba's most important places of interest.
Free!
Book