Feel the magic of the Andalusian capital exploring the golden-stone streets and architectural masterpieces of the beautiful historic centre of Seville. Don't miss this excursion from Estepona! 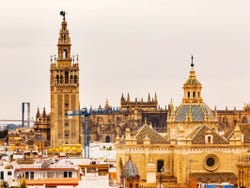 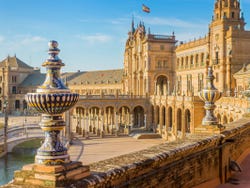 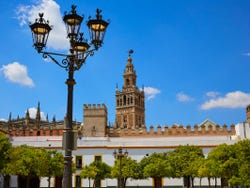 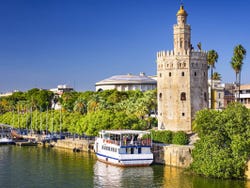 Having been picked up from Estepona, you'll leave the coast behind and head inland to the Andalusian capital, Seville.

On arrival, you'll embark on a guided walking tour of the city's historic centre. Discover emblematic sights like the Plaza de España, an elegant square combining Renaissance Revival and Neo-Mudéjar architectural styles, which Star Wars fans may recognise as a filming location from Episode II - Attack of the Clones.

As you stroll through the María Luisa Gardens in which Plaza de España is located, your guide will reveal curious facts about the poets and writers who have found inspiration in this romantic park. You'll see statues dedicated to several such figures, including Bécquer and the Machado brothers, before wandering over to the historic Santa Cruz district.

Exploring the picturesque winding lanes of Santa Cruz, you'll be met with an enticing aroma: the fragrance of its flowers, which give this neighbourhood its vibrant colour. You'll then head over to Seville Cathedral, where you'll enjoy a guided tour. Inside this majestic church, a World Heritage Site, you'll discover great artistic and architectural treasures. The pretty Patio de los Naranajos courtyard and intricate Giralda, the minaret of the mosque that formerly stood here, are two beautiful highlights.

At the end of your guided tour of the Cathedral, you'll have free time to explore and eat lunch at your own pace. In the afternoon, you'll meet back up at the Torre del Oro, or Tower of Gold, a 13th century watchtower built on the banks of the Guadalquivir River, before making the return journey to Estepona.

This tour may make a number of stops along the Costa del Sol to pick other people up on the route.

Entrance to museums and monuments visited during free time.

You can book up until the previous day (12:00 pm) if there are still places available. Book now to guarantee your spot.

US$ 91.30
Free cancellation up to 24 hours before the service starts
Book

Free! Free cancellation up to 24 hours before the activity starts. If you cancel under this time or do not show up, you will not be refunded.
like New

New
Whitewashed streets, vibrant flower pots and the sea breeze: discover the charms of the Garden of the Costa del Sol on this private tour of Estepona.
US$ 71.10 per group
Book
like Free

8 / 10 1 review
Visit one of the most enchanting old towns on the Costa del Sol on this free walking tour of Estepona. Discover its history while you explore!
Free!
Book
like

10 / 10 2 reviews
Make the most of your trip to Estepona: discover its beautiful bay on a boat cruise. Snorkel and swim in the Mediterranean, and see if you can spot dolphins!
US$ 53.30
Book