Immerse yourself in the world of Game of Thrones on this free tour of its filming locations in Girona. Discover intriguing anecdotes about one of the most popular series in recent years. 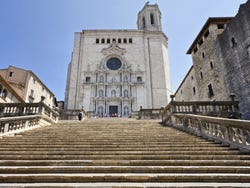 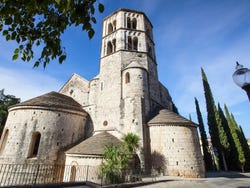 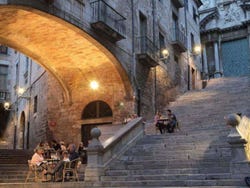 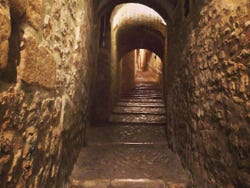 Meet your guide in Plaça de Sant Feliu in the heart of Girona's historic centre, ready to begin your free walking tour around the city in search of the filming locations of the legendary TV series Game of Thrones.

The first stop on your tour will be outside the Girona Cathedral. Recognise the stairs leading up to the majestic church? They starred as the setting of Margaery Tyrell's Standoff at the Great Sept of Baelor in King's Landing. Just behind the cathedral, you'll find the Carrer del Bisbe Josep Cartañà​, where Arya Stark begs for help on a street in Braavos.

Continuing on your route, you'll reach Sant Pere de Galligants Abbey, which Game of Thrones fan will surely recognise as the Citadel Grand Library. Just in front of the monastery, you'll find yourself in the Plaça dels Jurats, whose Medieval architecture did not go unseen by the series' directors, who chose this spot in Girona to film the theatre scene where Arya discovers what has happened to her family...

Throughout your free tour, you'll not only be entertained with curious facts about Game of Thrones but about the city of Girona too. You'll end the tour feeling like a true expert!

At monuments, museums and attractions, the maximum permitted capacity will be a 30% of the total maximum capacity.

You can book up until 30 minutes before the activity as long as there are still places. Book now to guarantee your spot.

Dali Tour of Figueres and Cadaques

10 / 10 11 reviews
Follow the footsteps of the celebrated artist Salvador Dalí on this tour that takes you to his birthplace Figueres and to two places from his life.
US$ 148.30
Book
like

9.50 / 10 47 reviews
Follow in the footsteps of one of Spain's most important historic communities on this guided tour through Girona's Jewish Quarter.
US$ 32
Book
like Free

9.10 / 10 350 reviews
Join this free tour of Girona and discover its beautiful Cathedral, cobblestone streets and Roman heritage. Plus, it's FREE!
Free!
Book