The Caldera de Bandama, Agaete valley, the villages of Arucas and Teror and many other charming locations are waiting for you on this Gran Canaria Private Tour. 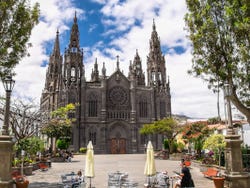 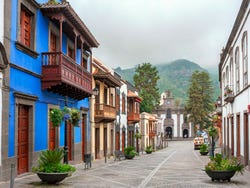 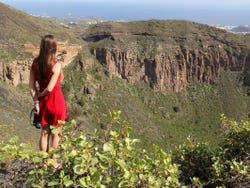 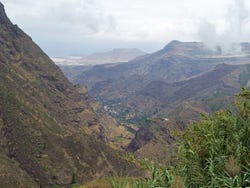 We'll pick you up at your hotel at 9 am and head to one of the most amazing natural areas of the island, the Caldera de Bandama.

The Caldera de Bandama originated thousands of years ago due to the succession of various volcanic eruptions resulting in an immense open-air crater Various myths and legends have emerged around this opening in the ground, which we'll reveal during the tour.

The tour then will continue to Teror. In this picturesque Gran Canarian village, we'll visit the Basilica of Nuestra Señora del Pino, which houses the carving of the island's patron saint. After having free time for lunch (as it is a private tour, you choose where and how long you spend eating), we'll move on to another of the most beautiful municipalities in the north of Gran Canaria, Arucas. Besides its sweet honey rum, this town also stands out for its imposing church of San Juan Bautista. Even though it looks like it, it isn't a cathedral! Do you know why? We'll discover it during the tour.

Crossing the Agaete valley, we'll follow the route towards the town of the same name and stop at Puerto de las Nieves. Finally, we'll return to your hotel in Gran Canaria, arriving at 5 pm.

This private tour only includes pick-up from hotels in Las Palmas and Maspalomas. If you're staying in other places on the island, you'll have to make your own way to one of the two pick-up areas.

By booking this private tour of Gran Canaria, you can visit the island with your partner, family or friends - there will be no other people in the group! You'll have a guide just for you. If you're a large group, you'll save money.

The capacity of all means of transport will be reduced to 50% of their maximum capacity.

English speaking guide specialized in the history and landscapes of Gran Canaria.

8.20 / 10 22 reviews
Discover the amazing marine life of Gran Canaria onboard a boat with a transparent deck . You will sail alongside wonderful dolphins and whales.
US$ 42.40
Book
like

8.80 / 10 23 reviews
Travel by buggy at full spee through the south of Gran Canaria at full speed. You will cross paths, mountains and roads enjoying spectacular landscapes.
US$ 115.10
Book
like

Guided tour of the Cathedral of Santa Ana + Columbus House

8 / 10 2 reviews
Explore the old town of Las Palmas with this fantastic tour of Vegueta. You will enjoy a fab tour of the Santa Ana Cathedral and the House of Columbus.
US$ 26.60
Book