Discover Jaen's historical city center, as well as the most iconic places of this enchanting Andalusian city when you take our fantastic guided tour. One of Spain's great undiscovered treasured nestled among the beautiful countryside and extensive olive groves. 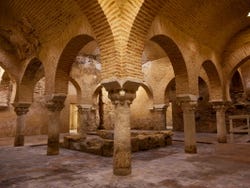 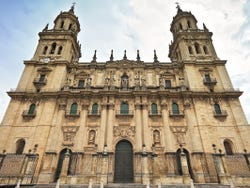 Our visit begins in the Plaza de Santa María square, opposite the Cathedral of Jaen, one of the jewels of the Spanish Renaissance. We will learn all about its fascinating history and why it is regarded as the World Capital of Olive Olive.

Then we head to the fascinating Air raid shelter, located less than ten minutes' walk from the temple. The shelter will transport us to the time of the Spanish Civil War. As we explore this monument, today symbolizing a space for peace, we'll learn what life was like in Jaén during this conflict.

We will also visit the Palace of Villardompardo, one of Jaén's essential landmarks and which houses the largest Arab Baths in the world. These baths were discovered at the beginning of the 20th-century and today boast of being the best-preserved in Spain.

The visit then continues at the elegant Convent of Santo Domingo, located just one street away from the Arab Baths, and which today is the home to the Provincial Historical Archive of the city.

Our fantastic guided tour concludes at the Church of La Magdalena, the oldest in the capital and where we will hear about the legend of the Lizard of Jaen.

Admission to the Cathedral of Jaen

Depending on the tour time you choose, we'll visit the interior of the cathedral of Jaen or we'll tell you all of its secrets from the outside. We'll be only able to access the monument during the Friday afternoon tour, Saturday morning and afternoon tours and Sunday morning tour.

Entry to Jaen Cathedral for people over 12 years old.

Entry to the Air raid shelter.

Entry to the Arab Baths and the Palace of Villardompardo.

US$ 17.80
Free cancellation up to 48 hours before the service starts
Book

9.70 / 10 86 reviews
Do you want to discover the legends, mysteries and love stories that surround Jaen? Explore its streets to learn about its lesser-known history at nightfall!
US$ 11.90
Book
like

9.60 / 10 46 reviews
Its magnificent façade makes Jaen Cathedral one of the most remarkable works of the Spanish Renaissance. On this guided tour we'll find out all about it!
US$ 11.90
Book
like

9.50 / 10 23 reviews
Visit the best-preserved Arab baths in Europe with this Arab Baths and Villardompardo Palace Tour. Discover the washing ritual during the Andalusian period.
US$ 11.90
Book