Let yourself be surprised by the Postojna Cave and Predjama Castle with this tour from Koper. You'll learn about the secrets of Slovenian rocks while enjoying a train ride. 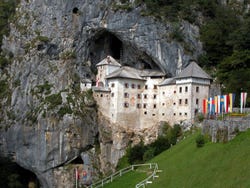 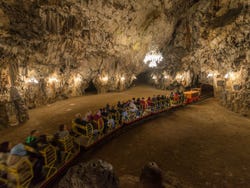 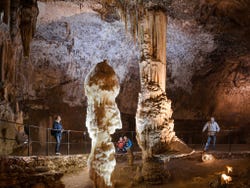 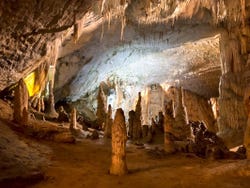 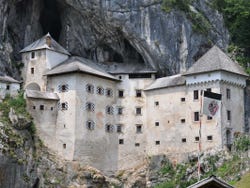 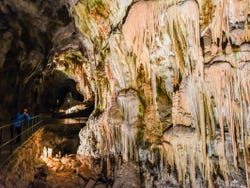 We'll meet at the port of Koper at the time of your choosing. Once we're all there, we'll travel in a comfortable minibus to Postojna, the most visited karst cave in Europe.

When we arrive at Postojna cave, we'll explore its interior discovering the different formations of stalactites and stalagmites that it houses. To learn more about the important geological heritage of these caves, we'll take a fun train ride that will take us to see the ballroom, the Murano glass lamps or the small caves.

With this route, we'll go through the 5 kilometres of underground galleries that are open to the public while we reveal the thousands of secrets of Postojna. For example, did you know that it is believed that a dragon used to live in them? It will be an unforgettable walk!

After an hour and a half visiting these impressive caves, we'll go to the second stop of the tour: the castle of Predjama, only 15 minutes away. Are you ready to explore the largest castle in the world built inside a cave?

We'll stop in front of this imposing fortress carved into the rock and tell you some of its curiosities, such as the legend of the famous Erasmus of Predjama, also known as the Slovenian Robin Hood. Without a doubt, both its location on a cliff and the aura of mystery that surrounds it will leave you speechless.

Finally, we'll return to Koper, arriving after a four and a half hour excursion.

The activity takes place with a driver that speaks in english and spanish.

Audio guide in English in the cave Postojna.

Ride on the tourist train in Postojna.

US$ 82.30
Free cancellation up to 24 hours before the service starts
Book

New
If you love animals and nature, join this excursion from Koper to Lipica and the Škocjan Caves. You'll discover two important emblems of Slovenia!
US$ 107.30
Book
like

No rating yet
Let yourself be seduced by the flavours of the Istrian Peninsula with this delicious Istria Food Tour. You'll travel through Hum, Motovun and Grozhnjan.
US$ 113.30
Book
like

No rating yet
Get on a bike and enjoy a fun experience with this Parenzana Trail Bike Tour. You'll ride along one of the most beautiful cycling routes in Europe.
US$ 77.50
Book