Explore the city of Logroño and discover its most emblematic monuments on this guided tour. You'll also get to taste some famous La Rioja wine! 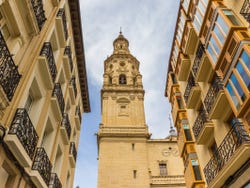 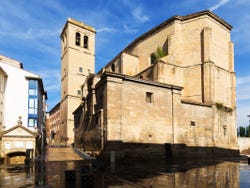 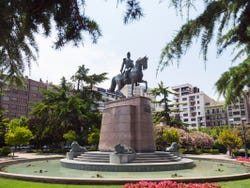 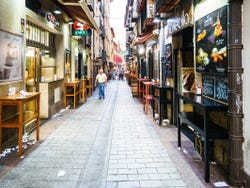 We'll meet at 7 pm at the Logroño Tourist Office in the heart of the city, and from there we'll set off on a guided tour of the centre of the capital of La Rioja.

First, we'll go to see the Muralla del Revellín, the remains of the medieval fortifications that were built in Logroño, of which only the western gate has been preserved. Next, we'll head to the Parliament, which is currently located in what used to be the Convento de la Merced convent.

Afterwards, we'll admire the Iglesia de Santiago el Real church, as well as the churches of Santa María de Palacio and San Bartolomé. We'll also stop in front of the most important religious monument in the city: the Co-cathedral of Santa María de la Redonda. Did you know it houses a work by Michelangelo Buonarroti himself?

Later, we'll tell you all about the city's role in the Camino de Santiago as we walk along the streets Ruavieja and Barriocepo until we reach the house of Jacinta Martínez de Sicilia, wife of General Espartero. We'll also visit the Plaza del Mercado market square and the Museo de La Rioja museum, an 18th-century palace that served as Espartero's residence after he retired from politics.

The guided tour of Logroño will end on the famous Calle Laurel, a popular street to have pinchos (tapas) and, of course, taste some La Rioja wine!

If you want a more personalised visit with an exclusive guide just for you, you can take the private tour of Logroño. Moreover, if you're a large group, you'll save money!

Visual: Varies according to the attraction included. Information in accessible formats.

Auditory: Has measures for hearing accessibility.

Intellectual: Has measures for cognitive accessibility.

US$ 11.80
Free cancellation up to 24 hours before the service starts
Book

9.50 / 10 53 reviews
It wouldn't be a trip to the Rioja region without a wine tour! Enjoy a guided visit of the Viña Ijalba winery including a wine tasting.
US$ 14.20
Book
like

9.50 / 10 101 reviews
Discover the best kept secrets of the centenary wine of the Bodegas Franco-Españolas winery with this guided tour. You will even enjoy a wine tasting!
US$ 16.50
Book
like

No rating yet
Discover the wineries and medieval villages around the La Rioja region with a Logroño Private Day Trip. Tour the Rioja Alavesa or the Rioja Alta with a guide.
US$ 495.90 per group
Book