Discover Punta del Este and Piriápolis on this trip from Montevideo. We'll take you along Uruguay's glorious Costa de Oro coastline to the two most important resort towns in the region. 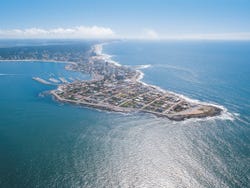 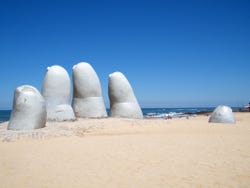 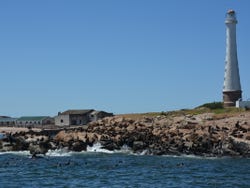 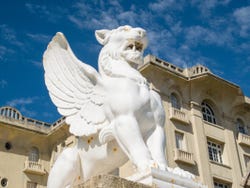 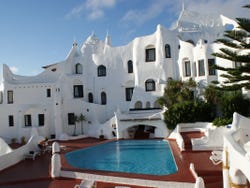 We'll pick you up from your hotel in Montevideo at 8:15 am and leave the capital behind as we head east. Our journey will take us along the spectacular Costa de Oro coastline until we arrive at the charming resort town of Piriapolis.

Once in the town, we'll take you to the Hotel Argentino, an enormous, historic building that dates back to the beginning of the 20th century. We'll also climb up San Antonio hill which offers stunning views across the beach and the town which was one of the first holiday resorts in Uruguay.

Then we'll head to Punta Ballena to visit the famous Casapueblo citadel, which was built by Uruguayan sculptor Carlos Páez Vilarós. He began working on it in 1958 using planks and materials found on the seashore. What started as a wooden shack is today a 13-floor mansion which houses a museum, art gallery, hotel.

The following stop on our excursion is town of Punta del Este, known as the "Monaco of the South". You'll see the magnificent mansions and summer homes which adorn the neighbourhoods of Beverly Hills, El Golf, Cantegril, and San Rafael.

Our tour then continues at Barra de Maldonado, an ancient fishing port named after the river which flows into the Atlantic Ocean here. Afterwards, we'll board a bus and head to Playa Brava and Playa Mansa beaches, the former famous for its finger sculpture emerging from the sand.

We finish the trip in the city centre, where you'll have free time to eat in one of the traditional restaurants or do some shopping in the handicrafts market. Around 4 pm we'll leave Punte del Este and head back to Montevideo.

The activity takes place with a guide that speaks en english, although it may occasionally be done in two languages.

Mikaela very nice, she handled herself very well when explaining everything, nothing to say about her. The only point is that it took almost 1 hr to go through the Hotel, if they say that it is at 8:15 it is at that time or they warn that they will be late. But I loved everything else, although time is short Opinion translated. Show original.

Very complete tour to know the city in a round trip. I would define it as essential. The guide was extremely friendly and well prepared. Yes, it is worth it. Opinion translated. Show original.

The excursion to Punta del Este is very worth it! Maybe I would leave a little more time to visit Casapueblo better, it is a super nice place that in just 40 minutes is short, but everything else was a very good experience! Thank you so much for everything Opinion translated. Show original.

7.90 / 10 25 reviews
Climb onboard the fantastic Montevideo sightseeing bus and take a fantastic panoramic tour of the city's iconic landmarks.
US$ 17.80
Book
like Free

9.80 / 10 115 reviews
Modernism and tradition combine in the old city of Montevideo. Discover its architectural legacy with this free tour around the Uruguayan capital.
Free!
Book
like -12%