Admire centuries of beautiful architecture on this guided Spanish-language tour of Murcia's historic centre, the best way to immerse yourself in the Spanish city. 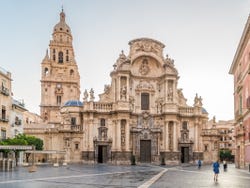 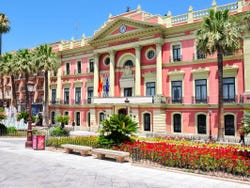 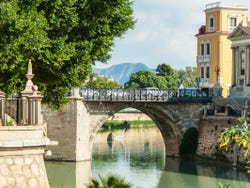 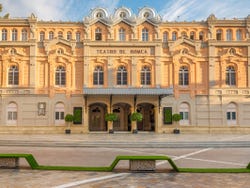 Your tour of Murcia will begin at the Plaza de la Glorieta de España, a square in the heart of the city centre lined with beautiful buildings like the Casa Consistorial, or Town Hall. As you admire its pink Neoclassical-style façade, your Spanish-speaking guide will begin to reveal interesting facts about the history of this southern Spanish city.

Wander through the square, passing the curiously-named "El Martillo", or "The Hammer", before reaching the nearby Puente Viejo, or Old Bridge, which spans the River Segura. Despite being well-named, as it is the oldest bridge in the city, it also goes by another name, Puente de los Peligros, or Bridge of the Hazards! Don't worry though, you're in no danger: the viaduct's nickname actually has a religious explanation.

Following the same theme, your guided tour of Murcia will continue to three historic churches: the Iglesia de San Pedro, Iglesia de Santa Catalina and the Parroquia de San Bartolomé, whose architecture will demonstrate the contrasts between Baroque and Mudéjar art. Wandering through the historic centre, you'll pass by buildings representing a range of different architectural styles, including Modernist, before arriving at the Murcia Cathedral. Its façade, an exquisite Spanish Baroque masterpiece, will leave you speechless!

Murcia Cathedral stands out not just for his beautiful architecture, but also for its 95-metre-tall (312 foot) belltower, the tallest in Spain. Continuing along Trapería and Platerías Streets - whose Spanish names refer to the Medieval trades that were centred there - you'll find yourself in the square that is home to the iconic Romea Theatre, at the heart of Murcia's cultural life.

From the theatre, you'll make your way to the Convent-Church of La Merced. You can't leave Murcia without knowing its history... to discover it, you'll have to travel back to the Middle Ages! Your next stop, at the incredible San Esteban archaeological site, will help you understand Murcia's past during the Islamic era of Al-Andalus.

Your tour will come to an end in front of the nearby San Miguel Church.

US$ 14.50
Free cancellation up to 24 hours before the service starts
Book

No rating yet
Enjoy free entry and discounts at the top tourist attractions of one of Spain's most beautiful cities when you purchase the Murcia Tourist Card.
US$ 14.50
Book
like

Mysteries and Legends Tour of Murcia

9.40 / 10 72 reviews
Fascinating mysteries and legends lie waiting to be discovered under the starry night sky of Murcia, on this fantastic tour.
US$ 10.90
Book
like

9.60 / 10 11 reviews
Explore Terra Natura, a zoological park where you will find more than 300 animals from every exotic corner of the globe and the local region.
US$ 18.20
Book