Retrace the dark and well-known past of the Third Reich with a Nuremberg Private Day Trip. Choose between 2 tours and visit some of the most symbolic locations in history. 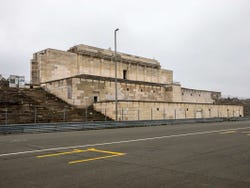 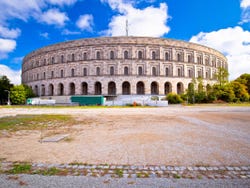 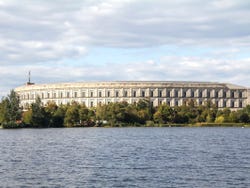 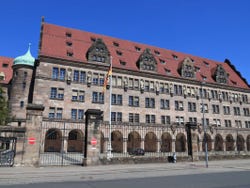 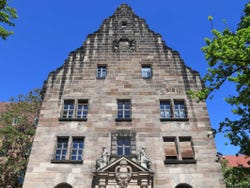 If you have several days to spend in Nuremberg and would like to discover the surroundings of the city with an English speaking language guide exclusively for you, we recommend booking one of the following private excursions.

After picking up at the hotel at the agreed time, we'll head to the Rally Area, located south of Nuremberg.

This huge architectural complex, Reichsparteitagsgelände, consists of structures such as the Zeppelin Field and the Kongresshalle. This latter construction, which has remained unfinished and similar to a modern Coliseum, was designed to accommodate 50,000 people and was built to demonstrate to the world the strength of the Nazi party.

We'll also see other symbolic locations that have given Nuremberg the nickname of the ideological capital of the Third Reich, such as the Luitpold Arena and the Große Straße, a colossal paved avenue created especially for military parades.

After spending 3 hours learning about one of the darkest chapters of recent world history, we'll take you back to your hotel in Nuremberg.

We'll pick you up at your hotel and drive to the Reichsparteitagsgelände, the Rally Area. Inside this gigantic architectural complex, we'll find a number of buildings reflecting the Nazi dictator, such as the Zeppelin Field and the Kongresshalle, the imposing Nuremberg Congress Palace, places from which the Führer used to make his most heated and tremendous speeches.

During this tour, we'll not only learn how the party succeeded in convincing millions of people to take up his cause, but we'll also go over the events that involved the main leaders of the Nazi party after the World War.

We'll then move on to the city's courthouse, the famous Nuremberg Trial took place, in which 34 of the most fearsome Nazi criminals were judged. The tour will take us to Courtroom 600, where the main trial took place, and 12 other subsequent criminal proceedings, from 1945 to 1949.

The 4 hour tour will end returning to your hotel.

Advantages of a private excursion

By booking a private excursion, you'll enjoy a personalised service. In addition, you can carry out the tour on the day and at the time you prefer and modify the itinerary according to your needs.

The Palace of Justice is closed to the public on Tuesdays.

Pick up and drop off service.

Private and exclusive tour, there will be no on else in the group.

Tickets for the points of interest during the tour.

Per group from
US$ 242.40
Free cancellation up to 7 days before
Book

9.40 / 10 471 reviews
Nuremberg is a city with hundreds of stories to tell. Join us on this free walking tour around the historical centre and find out more!
Free!
Book
like

7.70 / 10 6 reviews
The Nuremberg and Fürth tourist card includes free entry to various museums and monuments and access to all the public transport in the city.
US$ 33
Book
like

9.70 / 10 69 reviews
Considered by the Nazis as the "most German of German cities", Nuremberg was an important city under the Third Reich. Discover this dark period of history.
US$ 18.20
Book