Wander through the historic centre of Sanlúcar in search of the most beautiful homes with this Merchants' Manor Houses Tour. You'll discover the luxury and opulence of those travelling to the New World. 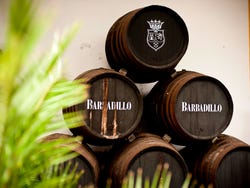 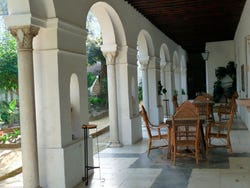 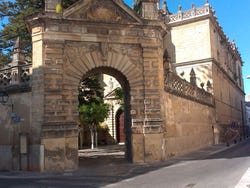 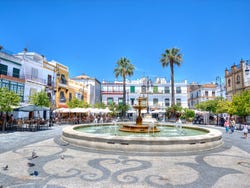 The tour will start at 11 am next to Santiago Castle, located in front of Barbadillo Bodegas. We'll sample their most important product by tasting a glass of Manzanilla, a perfect start to this route.

During the two-hour guided tour, we'll walk through Sanlúcar's historic centre following the trail of the Merchants' Manor Houses. Trade with the New World during the 17th and 18th centuries led to the construction of these refined homes, they're so extravagant that they often look like palaces. First, we'll visit Francisco Gil de Ledesma's House, a wine-cellar that belonged to the Honorary Mayor of the city.

The tour will continue to the Gómez Barreda House. Its baroque façade, one of the most beautiful in its street, will show us the power that this family achieved. We'll then arrive at the Santo Domingo Convent, where numerous religious people lived there while they waited for their ship to sail. We'll stop shortly after in front of the Casa de Ceballos, another magnificent example of 18th-century architecture.

We'll learn more about how the trade worked and how the merchants became so rich, next to the old Sanluqueña branch of the Casa de la Contratación. Its administration controlled all product transactions between the New and the Old World. Although its headquarters were in Seville, the Sanlúcar "subsidiary" had a great deal of official activity.

The tour will end at 1 pm in the Plaza del Cabildo, one of the most famous tapas areas located in the heart of Sanlúcar.

A glass of Manzanilla tasting in a traditional bodega.

US$ 26.10
Free cancellation up to 48 hours before the service starts
Book

9.40 / 10 22 reviews
Manzanilla de Sanlúcar sherry is one of the symbols of this town in Cadiz. Enjoy a wine tasting on this guided tour of the Bodegas Barbadillo.
US$ 11.90
Book
like

8.70 / 10 3 reviews
Discover the Cadiz city known for sherry cellars and waterfront horse races with this Sanlúcar Private Tour. You'll have an exclusive guide just for your group.
US$ 119 per group
Book
like

9.60 / 10 18 reviews
Discover the treasures of the pretty seaside town of Sanlucar de Barrameda on this guided walking tour of the Andalusian city's historic quarter.
US$ 26.10
Book