Discover the impressive legacy and World Heritage Sites of Split on this walking tour. Explore this city full of history - cathedrals, palaces, and much more await you. 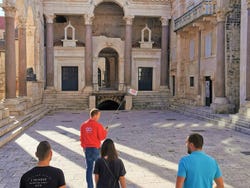 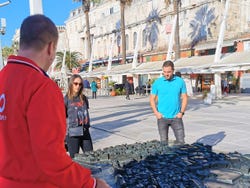 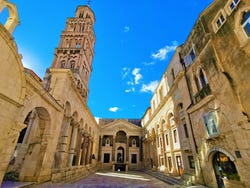 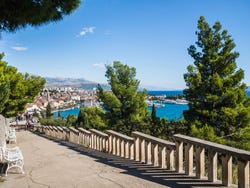 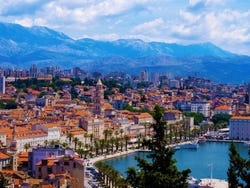 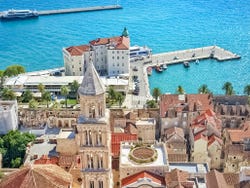 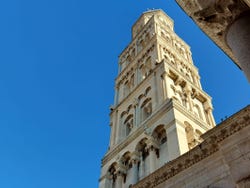 This walking tour of Split will start in the city's old town. You'll delve into the Roman past of the city by visiting first the exterior of the ancient Diocletian Palace. For instance, do you know why this emperor decided to spend his last years on the Adriatic coast? The palace has a large courtyard, called peristyle, from which you'll better admire this large architectural ensemble. Can you spot the enigmatic sphinxes closely guarding the place?

You'll continue the walk accessing the interior of the Cathedral of Saint Domnius. Originally built as the mausoleum for Emperor Diocletian, the temple houses a valuable treasure. Among the most outstanding objects, you'll find great pieces such as goldsmithery items, lockets, manuscripts... This city's history all in one place.

Over the years, those in charge of the Cathedral decided to use the old Temple of Jupiter as a baptistery, which is how the space reserved for baptisms is called. You'll visit its interior to discover how the pagan god the temple it's named after was worshipped in ancient times.

You'll follow the layout of the Cardo, one of the main streets the Romans originally built in Split, and you'll reach the final stop of this tour: the Golden Gate. In front of this impressive arch, we'll see the gigantic statue of Bishop Gregory of Nin. Legend says that rubbing one of the feet of the statue brings good luck... It's worth a try, right?

English speaking guide, expert in the history of Split.

Entrance tickets to the Cathedral of Saint Domnius and the Temple of Jupiter.

You can book up until 2 hours before the activity as long as there are still places. Book now to guarantee your spot.

US$ 23.70
Free cancellation up to 24 hours before the service starts
Book

8.70 / 10 3 reviews
Discover a tropical paradise in the heart of the Dalmatian Coast. Visit the beautiful Blue Lagoon and historic Trogir on this boat trip from Split.
US$ 70
Book
like

10 / 10 5 reviews
Put the perfect finishing touch on your day: enjoy a sunset cruise around Split. Enjoy a drink on deck as you watch the last rays of sun illuminate the city.
US$ 47.40
Book
like New

New
This kayak tour of Split is the best way to combine sport and tourism in one of the most beautiful cities on the Dalmatian Coast. Ready for adventure?
US$ 46.30
Book