The Fortaleza de la Mota in Alcalá la Real, is one of the most outstanding medieval defensive monuments in the province of Jaén. Get your ticket to visit it! 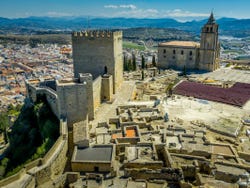 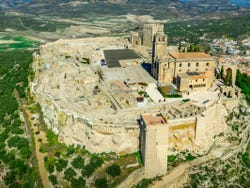 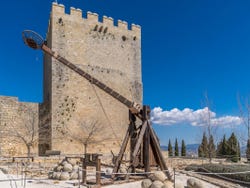 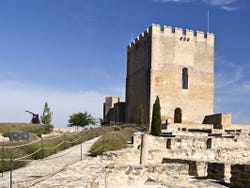 Built between the 12th and 14th centuries, during the Andalusian period, the Fortaleza de la Mota is one of the best-preserved medieval defensive buildings in the province of Jaén. This spectacular castle is located on a hill in Alcalá la Real with spectacular views.

You can explore the castle at your leisure and your ticket includes an English audioguide so you can learn about the history of the different areas of this great monument.

Admire the thick walls surrounding the castle and its several watchtowers such as the Torre de la Vela, the Torre Mocha and the Torre del Homenaje.

Within the walled perimeter there is also an old residential neighbourhood called El Bahondillo where you'll be able to admire some fascinating cave dwellings. There is also a nevero, a space protected from the sun to preserve food and drink. What's more, you can see the remains of the wine cellars and learn about the importance of wine production in this part of Andalusia during the Andalusian period.

The current Main Abbey was built in Christian times on the remains of the old mosque. We'll marvel at this Renaissance building with its gargoyles and pinnacles.

In this area we can also find the Torre de la Cárcel prison tower and the Casas del Cabildo houses, which made up the administrative and religious centre of the fortress. The remains of the ancient noble palaces that were occupied by the wealthy class are also preserved.

US$ 7.30
Free cancellation up to 24 hours before the service starts
Book

Show all the reviews